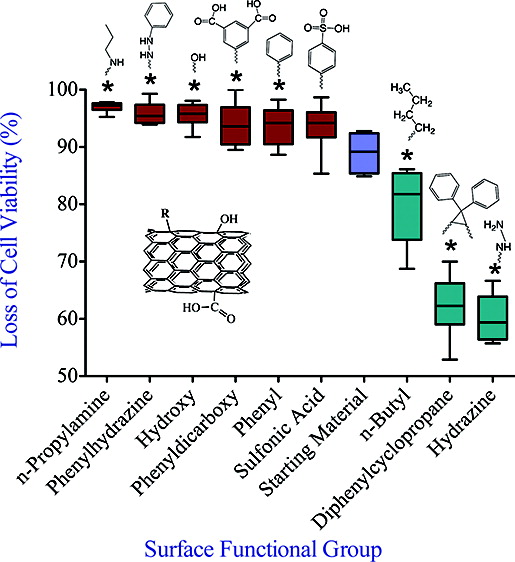 The addition of surface functional groups to single-walled carbon nanotubes (SWNTs) is realized as an opportunity to achieve enhanced functionality in the intended application. At the same time, several functionalized SWNTs (fSWNTs), compared to SWNTs, have been shown to exhibit decreased cytotoxicity. Therefore, this unique class of emerging nanomaterials offers the potential enhancement of SWNT applications and potentially simultaneous reduction of their negative human health and environmental impacts depending on the specific functionalization. Here, the percent cell viability loss of Escherichia coli K12 resulting from the interaction with nine fSWNTs, n-propylamine, phenylhydrazine, hydroxyl, phenydicarboxy, phenyl, sulfonic acid,n-butyl, diphenylcyclopropyl, and hydrazine SWNT, is presented. The functional groups range in molecular size, chemical composition, and physicochemical properties. While physiochemical characteristics of the fSWNTs did not correlate, either singularly or in combination, with the observed trend in cell viability, results from combined light scattering techniques (both dynamic and static) elucidate that the percent loss of cell viability can be correlated to fSWNT aggregate size distribution, or dispersity, as well as morphology. Specifically, when the aggregate size polydispersity, quantified as the width of the distribution curve, and the aggregate compactness, quantified by the fractal dimension, are taken together, we find that highly compact and narrowly distributed aggregate size are characteristics of fSWNTs that result in reduced cytotoxicity. The results presented here suggest that surface functionalization has an indirect effect on the bacterial cytotoxicity of SWNTs through the impact on aggregation state, both dispersity and morphology.

This work was among the first to highlight the importance of dispersion quality on the various applications and environmental implications of carbon nanotubes. Since 2012, this work has been cited nearly 50 times. Lead author Leanne Gilbertson is now an Assistant Professor at the University of Pittsburgh. Continue reading for subsequent papers supported by the Facility for Light Scattering: